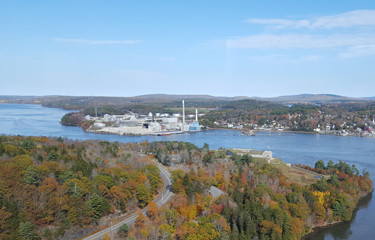 Late last month, Maine, U.S.A.-based Whole Oceans officially closed a deal with AIM Development to purchase a plot of land once occupied by a former paper mill in Bucksport, Maine.

The deal signified the culmination of years of work the company put in to its plan to build a large salmon recirculating aquaculture system (RAS) facility on the site. Whole Oceans announced the project in 2018, and has been undergoing permitting through both the state and Bucksport since.

“Closing on the property is obviously a big milestone. It makes the project tangible and real, and it gives credence to all the efforts over the past couple years,” Whole Oceans President Jason Mitchell told SeafoodSource.

Buying the property came after years of researching locations, making sure prerequisites have been met, doing due diligence, permitting, and more. But despite the milestone, the company isn’t counting its salmon before its raised.

“You might call that milestone a false peak,” Mitchell said. “This is actually just the beginning.”

That goes for both the facility in Bucksport, and Whole Oceans as a company. The initial goal for the Bucksport facility is to reach a capacity of 5,000 metric tons (MT) of salmon each year, which could increase over time. But the success of the Bucksport process has led the company to aim higher.

“Having grown so much so quickly, our aspirations have grown,” Mitchell said. “At one time we were bullish to start with 5,000 metric tons, I still think that’s where we’ll start. But we’ll design and build in the capacity to quickly grow to 10,000 [MT], and we want to get to 50,000 metric tons in the region. And we want to do the same on the west coast.”

Mitchell said the company is already actively looking at sites on both coasts, though he couldn’t share any further details on locations.

Based on the current site, the company would do well to find another defunct paper mill. The Bucksport location, said Mitchell, had a lot of the existing infrastructure that a land-based aquaculture system needs: intake and outfall pipes with plenty of water supply, access to electricity (a substation was already on site), and and a population that was open to what Whole Oceans was proposing.

“It’s really water, power, and people,” Mitchell said. “Our site has gotten great community support, and I think it’s important to acknowledge the sequence in which these events transpired.”

Bucksport had, for decades, been the beneficiary of having a large employer in the Verso paper mill that dominated a lot of the landscape in more ways than one. The mill closed in 2014, taking with it a major part of the town’s tax base and a huge chunk of the jobs available in the area.

“The town, they’re being proactive and resilient, they were prepared, and they quickly responded with their own master plan,” Mitchell said.

Jennifer Fortier, outreach and development associate with Whole Oceans, is a Maine native and told SeafoodSource that how Bucksport responded to the mill closure is a big part of why Whole Oceans’ schedule has managed to exceed the company’s expectations.

She pointed to the previous town manager’s forethought in setting aside a rainy-day fund so that the town could survive the closure of the mill without experiencing a jump in taxes. In addition, proactive members of the community have been working hard to champion what the town has to offer and attract different jobs and people.

“The town has so many amazing people in it that are really championing it. You go to these meetings and the same two dozen people are showing up to everything, there’s people who are really excited about their town,” Fortier said. “Every store front on Main Street is full, as of April, and that hasn’t happened in 10 years. That’s a testament to Bucksport as a whole, not just to us.”

Having motivated people in place is a part of what Fortier said makes the area a prime location for Whole Oceans.

“I think there’s a lot of potential here in Maine where we have a lot of people who are interested in re-training and interested in going into a new career,” she said. The facility won’t require just aquaculture experts, but electricians, plumbers, HVAC technicians, engineers, and more.”

For now, Mitchell said, the company is transitioning to submitting all of its construction permits to both the state and the town.

Permitting, he estimates, will likely take three to four months, and then the company will launch into site preparations with a proposed start date for construction in the spring of 2020.

“We would start production maybe halfway through the construction,” Mitchell said. Then, the later construction would need to keep up with the pace of the growing fish. Current estimates have fish to market three or four years down the line.

Whole Oceans is just one of four different RAS companies that have announced or are actively working on RAS project in Maine. Nordic Aquafarms, another large-scale salmon RAS, is aiming at a location just down the road in Belfast Maine. Aquabanq, as well, recently announced plans to build a salmon RAS in Maine. Kingfish Zeeland, a Dutch yellowtail farmer, has also announced plans for its own RAS for yellowtail in the state.

Mitchell said that even with all the new companies producing, the amount of room in the market allows for all of them to coexist comfortably.

“There’s room for all these new entrants in North America,” he said.

In fact, having a number of RAS facilities could allow for secondary benefits, like establishing greater infrastructure that benefits the industry – whether that be feed mills or other essential parts of the process.

Feed is an especially important part of the RAS process, Mitchell said.

“The nature of our systems and the need to control the water and think about things like biofilters and the bacteria in addition to the aquaculture fish change the approach that the companies have,” he said. “As the scale goes up, as more production comes online, the supply chain for the feed companies needs to evolve also.”

Then there’s the potential in Maine for a wider industry that is built with automation in mind from the ground up.

But Mitchell said he is concentrated on seeing the base project through to completion before looking too hard into additional opportunities.

“I get excited about these things. Really there’s so many offshoots of opportunity around the core of land-based aquaculture, that sometimes I have to reel myself back in,” he said. “You have to focus on the core business, let’s go get the site set up and get into producing. And that discussion quickly leads into all kinds of other opportunities, but you’ve got to make sure, as a start-up, you don’t get too distracted.”