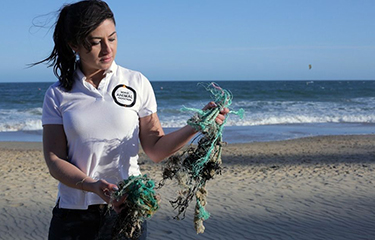 As the 2019 SeaWeb Seafood Summit came to a close this week in Bangkok, Thailand, attendees remembered Joanna (Jo) Toole, a beloved campaigner for ocean welfare and the co-founder of the Global Ghost Gear Initiative (GGGI), who tragically passed away in March 2019.

Toole was on board Ethiopian Airlines Flight 302 en route to Nairobi to speak at a United Nations meeting about how to tackle ghost gear in the world’s oceans when the plane crashed on Sunday, 10 March, 2019.

Joel Baziuk – head consultant at JRBBL Consulting, who works extensively with GGGI – accepted a donation from the Ocean Foundation at the close of the summit dedicated toward the new Joanna Toole Ghost Gear Solutions Award, established to honor Toole’s legacy.

“It’s with a very heavy heart that I accept the donation of the Ocean Foundation towards the Joanna Toole Ghost Gear Solutions Award, on behalf of her coworkers, colleagues, family, and friends,” Baziuk said. “Joanna was known to be a great ocean and animal welfare champion, but also a thoroughly wonderful person who is deeply missed by all who knew her. No matter where she was, Joanna tirelessly worked to make the world a better place, whether it was during her time at World Animal Protection, Ocean Care, or at the U.N. FAO.”

The Joanna Toole Ghost Gear Solutions Award, which was officially announced on World Oceans Day this year, will grant up to USD 40,000 (EUR 35,484) to the most deserving project that submits its strategy on how to tackle ghost gear, as judged by a panel of experts from GGGI and World Animal Protection.

An advocate of engaging the seafood industry with conservation efforts surrounding ghost gear cleanup, Toole was a frequent attendee of the summit, Baziuk said.

“Joanna also recognized that engaging the industry in a positive way was critical to finding lasting solutions for ghost gear, a metric which GGGI still holds true today. She attended the [SeaWeb Seafood] Summit in 2016 in Malta and in 2017 in Seattle, so honoring her legacy as someone who dedicated her life to ocean sustainability here at the [summit] in today Bangkok is fitting,” he said.

Adrian Toole, Joanna’s father, said the new award would help carry forward the legacy and memory of his daughter.

“Joanna’s work to protect our oceans and the life within them was not a job – it was her life. Since she was a little girl she knew that when she grew up she wanted a job where she could help animals – at World Animal Protection, Ocean Care and at the United Nations she was doing that every day,” he said on the GGGI’s website page dedicated to the award.

“Our family is so proud that Jo lived her dream and we know the Joanna Toole annual Ghost Gear Solutions Award will continue her legacy to make a positive difference for our oceans Jo worked so hard to protect,” he said.

In memory of Joanna, her family has also established a JustGiving page to raise funding for this award.